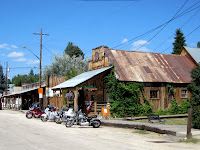 I wasn't going to do it: I was going to write, write and then write some more. I only started reading a few little Blogs, to have a rest from the relentless typing ; ) then I caught the bug - I just had to post. =\ oops!
Thanks to  the  Anne Riley MURDER Blogfest  I got happily sidetracked!
STAYING LOST - MG
The boards of the old house still whispered, protesting the presence of someone inside. Nerysa’s extra sense, honed by her years as a Navy Seal kicked in. Her left eye narrowed. She gazed at the house as if it were part of the conspiracy: deliberately withholding the identity of the enemy she knew was inside. Her nose creased with disgust at the incompetency she had just benefitted from.


The right side of her mouth pulled up into a grin without humour. This smelled rotten. She knew the worst Seal who’d ever made it all the way through training. She wouldn’t put it past him to be the only killer who still waited for her inside the house, keeping her dead mother company. Fish was just the kind of creep who would have killed the bleached out, alcohol-pickled woman. Hell, Fish would have enjoyed doing it. Not because he believed he could hurt Nerysa by killing her mother. Love was not something Eugene Fish understood. No, he’d just do it because she shared Nerysa’s name. But Fish wouldn’t find many other Na-gah Nuwuvi around: her Paiute father had no family except her and he’d died too young... too young to give her much sense of her Indian heritage. But he gave her the name teachers couldn’t pronounce and watching them squirm trying to force their tongues around it had given her the first taste of power; power is in the details.

The sound of laughter, which started small but built to a pitch that was just a little too high and wild, rumbled from the depths of her one-time home, “Nah Nah Nooh? Yoohoo!”

Fish, it would seem, was madder than ever – mad as a fish.

“Let’s you and I settle this properly: man to man?”

“I think we should have at it woman to woman.”

Nerysa kept low and didn’t make the mistake of moving from the shadow that had lengthened to include an area in front of the old shed. She couldn’t control the sneer that curled her lip as she watched Fish approach the screen door… low... his gun moving with his eyes as he scanned the area at the back of the house. It would be so easy just to take the shot, but where was the closure in that? Fish had killed her mother. She wanted to kill him, not shoot him.

“Oh, she’s good. Good as gold,” he returned. “She’s just catching a little shut-eye in the front room. I shut them for her.”

Nerysa felt the desire to explode into action and rip his head from his body. However, she’d worked hard to get away from her mother and had no desire to be joinin’ her in that other place – wherever it was – anytime soon. She hurt. The pain she had felt at the thought of her mother being dead was nothing compared to how she felt hearing Fish boast about killing her. So, Nerysa laughed. She laughed at Fish. She knew he’d be able to locate her position and that was good. It would bring him to her all the sooner. She was rewarded when she heard the screen door crash back against the wall.

Fish’s heavy booted feet covered the porch in one bound on his way towards her. He was big and strong but denser than Kevlar. He roared as he approached. He moved much too fast and flailed his arms wildly.

Nerysa smiled as she jumped to her feet, but that was just for his benefit: overconfidence never won any battles. She timed her roll and the scything leg kick to perfection. His momentum sent him sprawling forward. Nerysa had time to land a solid punch to the back of his kidney to help him on his way. He growled as he scrambled back towards his feet. He launched himself like a grizzly bear, Fish tried be the weapon... to throw himself at his smaller, lighter opponent. He had left nothing to protect his neck and jaw. Nerysa made sure that her fists were fast and deadly. It wasn’t until her third blow in succession she realised it was already “lights out” for Eugene Fish. He was toppling - to his knees and then less than flat on his back -  to the ground behind him. He’d be killing no more mothers, or little children, today – or, ever again.

Email ThisBlogThis!Share to TwitterShare to FacebookShare to Pinterest
Labels: murder and mayhem