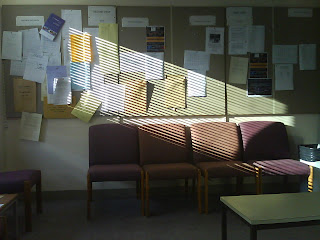 I need a medal for knowing this is the ninety-sixth time I have played with the first page of my novel. It is, however, only the second largest alteration. Originally, I wrote from the moment Jess got home from the airport.
After she arrived the night before, I lead her by the hand as she tried to get her place back in her old school... no longer Salters' School, now, the re-named, Woodford College.
CHAPTER 1
GOOD TO SEE YOU
I scanned the first floor Sixth Form Common Room, there were soft brown chairs clustered around low tables to the right and rows of dull grey lockers on the left.
Students dressed in office-smart fashions were standing around in groups. Right at the back near an open window, three boys were talking. Their heads were so close together they were almost touching. Standing there like that, they looked quite similar. The various shades of blond reminded me of the colour selection charts at the hairdressers. The boy whose back was towards me had just a hint spikes and tufts in the back of his hair, so cute.
He glanced around – forehead furrowed, eyes narrowed – he pushed his brothers further back into the room; there wasn’t much further they could go.
Maybe, not so cute after all; I looked around but I couldn’t see any reason why they had moved to the edge of the last window. It didn’t matter that much, I knew where I was going next.
Four pupils stood in the centre of the room. They were close enough for me to hear what they were saying.
“Another new girl?” remarked Anna, paying more attention to my tailored trousers and two-tone, heeled shoes. “She looks fashionable, but subdued.”
“Starting a week late for term? Bad news. We’ll see if she sorts out a friend. Check she’s alright,” Ali mumbled sucking on her short, blond plait.
Subdued? That was not really on my top ten list of qualities. It would have trouble getting onto the top hundred. Stepping away from the shadowed corridor, I threw myself forward arms wide to reach around them all.
What do you think?
It's priorities are right, Jess just wants to hang out with her friends, run, have fun and do a little school work, if her parents really make her.
Posted by Unknown at Sunday, May 23, 2010

Email ThisBlogThis!Share to TwitterShare to FacebookShare to Pinterest
Labels: Near Edgware page 1.96