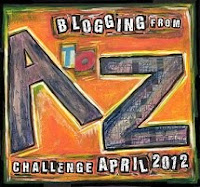 I'm nervous, Arlee Bird's Blogging from A to Z is looming large on the horizon. With one week to go until the start, only 1,211 Bloggers have signed up. To keep it manageable, Lee has been joined by an ever expanding team who will help to co-ordinate the Blogfest.
It is Lee's fault that April will always be flavoured alphabetically ;)
I'm preparing to spend April writing 26 blogposts on the same subject... again. I still haven't decided which A to Z idea - of the several that have been tumbling around in my head - I'm going to go with.
Last year, I posted an A to Z of CHARACTERISATION.
Doing the research and writing the posts... was an exhausting, but totally worthwhile, experience.
As a warm up ;) I have entered the Unicorn Bell Blog's A Picture Paints 1,000 Words Blogfest which is running from 26th to 28th March. All you do is select an image and write a story of 1,000 words (or less). 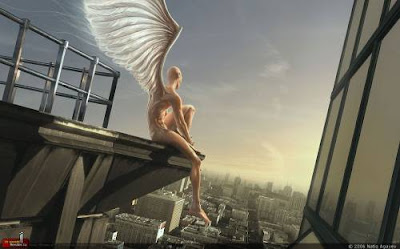 I was drawn to this picture. So far, I have written the opening and named the angel and the city. I think, that is more than half of the task ;)
ADAIN, DOWN
Noxious breath, dense with pollution, wheezed through Melekar city. It lay thick and slow in the streets, a lazy but efficient killer.

To get this far, I have researched smog, air pressure, toxic gases, poor breath sounds, wing physiology and hunted down suitable translations to name my angel and the city.
HAVE YOU RESEARCHED ANY UNUSUAL SUBJECTS THIS WEEK?
Posted by Unknown at Sunday, March 25, 2012

Email ThisBlogThis!Share to TwitterShare to FacebookShare to Pinterest
Labels: 000 words, Blogging from A to Z Arlee Bird ADAIN, DOWN A Picture Paints 1