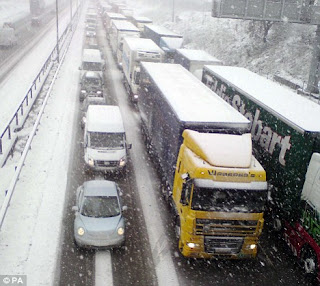 It was raining in Manchester when we drove past the places we'd danced, drunk and loitered outside in the first couple of years together. It was still raining in Warrington when we climbed the fire escape at the Hall of Residence trying to get closer to the first place we lived together - despite the small technical details like the non-cohabitation rule.
It wasn't raining when we reached Birmingham. It was snowing. I don't drive across town when it snows. The whiteout didn't know that.
The outside lane was safest because the guys who make their living driving the trailers, containers and car transporters didn't want to be late. Hurtling through the snow they played chase and overtake, using the slow lanes . I guess they thought everyone else could see them easily and we should all keep out of their way, I know I did. I pulled out wide and let the big guys play.
The flakes of snow were huge, fluffy but basically softies: couldn't land, couldn't stick, couldn't do much apart from cut down the visibility and melt into noise-hating, shushing slush at road level.
But, Car transporter guy saw a gap and threw his rig into the centre lane. The car there braked, I would have, too. But speed and slushy snow are a bad mix. The angle, as he veered from the well worn path, forced the melted snow to syphon through the tyres grooves and spew impenetrible slush onto my windscreen.
It fountained up and across at speed. Shock, lack of visibility, and the noise all combined to create the moment - the one where you wonder if there was anything you regretted not having had the chance to do, if the will was in order, if the car behind had left enough distance to not be involved in the mayhem.
Strangely calm, I held my breath and pictured the road as I had seen it last and kept the line.
There followed ten - hours - minutes - seconds of trying to do the same-old-same-old, not being reactionary and keeping the car under total control.
I drove home and decided today was a good day because it wasn't the day I died.
Posted by Unknown at Thursday, February 18, 2010

Email ThisBlogThis!Share to TwitterShare to FacebookShare to Pinterest
Labels: revisiting the past driving home snow having a future